The Egyptian Urn is a priceless object created and cursed by an ancient wizard. Whoever steals the urn is punished for their greed and killed by the Guardian of the Urn. The only way to escape the curse is to perform a selfless act.

The urn was relocated to a wealthy family mansion in Cairo. In 1999, three men, Wesley, Palmer Kellogg, and Clay Muniz broke into the house and stole the urn, unintentionally invoking the curse. Clay brought the urn to San Francisco and talked his ex-girlfriend, Phoebe, into convincing her sister, Prudence to auction it off.

Prue researched the urn and realized it was stolen, prompting her to stop it from being auctioned off. Palmer saw the urn and tried to get rid of it. After hearing Palmer mention the urn was cursed, Prue was inspired to telekinetically move the object to scare him off. The Guardian eventually found the urn and waited to punish the last victim.

After Clay sacrificed himself to protect Phoebe from a cobra summoned by the Guardian, the selfless act which redeemed him and allowed his life to be spared, the Guardian returned the urn to its rightful place in Cairo. 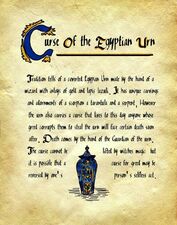 The entry on the Urn in the Book of Shadows.
Add a photo to this gallery

Retrieved from "https://blessed-a-charmed-spinoff.fandom.com/wiki/Egyptian_Urn?oldid=2836"
Community content is available under CC-BY-SA unless otherwise noted.