The first season of Blessed is set from 2015 to 2016. It has 6 episodes at the moment, but will eventually have a total of 22 episodes. All episodes being a timed at 1 hour. Blessed is a spin-off created by Matt based on WB hit series Charmed created by Constance M. Burge.

THE HALLIWELLS ARE BACK IN BUSINESS - Blessed follows the lives of three witches; descending from three (four since Eddie's parents both come from magical families) different lines of witches. Known as the Blessed Ones, three friends have the others' backs and are there to protect the innocent, while balancing their normal lives as your average everyday high school students.

Each one with unique powers will continue with the task of keeping the world safe from demons and all evil creatures. Leader Pip (Marco U.) the oldest Charmed prodigy possesses the power of Premonition, courageous Beverly (Sophia Lillis) who possesses the power of Pyrokinesis, and timid Eddie (Jack Dylan Grazer) who possesses the powers of Psychokinesis and X-Ray Vision. Individually, each of them are strong, but together they assume the mantle of the most powerful source of good magic the world has ever known since the Charmed Ones. Together they will have to face new arising evils while trying to deal with school and relationships, especially with what's within them. Each heart-stopping episode in this lavishly layered series is a spell-binding adventure sprinkled with much suspense and humor.

To read Season 1 scripts click on the link below:

Book of Shadows Pages in Blessed 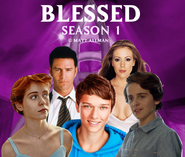 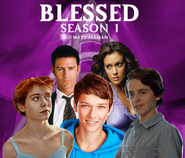 Season 1 Cover C
Add a photo to this gallery

Retrieved from "https://blessed-a-charmed-spinoff.fandom.com/wiki/Season_1?oldid=2605"
Community content is available under CC-BY-SA unless otherwise noted.